When we learned a couple months ago that Logan needed to take summer classes we decided he needed to do something extra fun during his measly one week break.  We both really wanted to go on a cruise so we looked at several different options (Caribbean, Disney, Mexican Riviera, etc.) and decided on a Mexican Riviera out of LA since it was the cheapest one to get to.  I've actually been on this cruise once before a couple years go but it definitely didn't disappoint--especially because I was with Logan this time!


One of my favorite things about cruises is dinner every night in the dining room.  I love getting to know the people at your table.  We definitely lucked out with some pretty awesome dinner guests! One couple was from San Francisco and the other from Salt Lake :)


Our first port was Cabo which I love!  The first day we took a little "water taxi" as they call it around the area and got some fun pictures.  The majority of these pictures were taken from or near Lover's and Divorce Beach--yep, that's what they're really called!  Lover's Beach is where most people hang out and the Divorce Beach side is too dangerous to even swim by.  The waves are absolutely HUGE!  Logan told me he was going to swim in them when I was telling him about it and then he saw how big they really are... 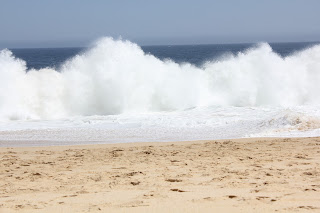 This picture really doesn't do the waves justice at all but trust me, they were enormous! 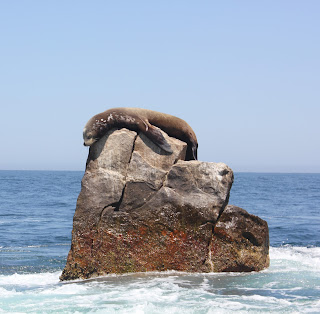 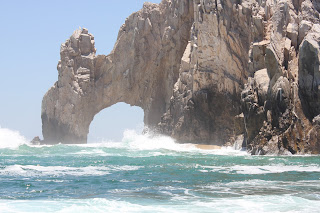 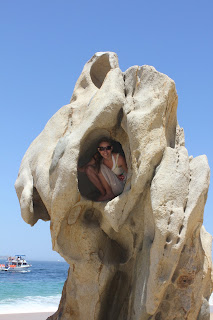 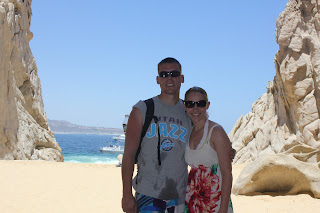 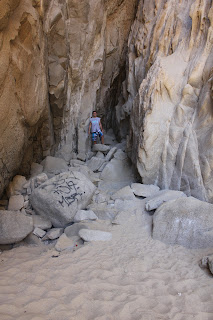 Because of everything going on in Mazatlan cruise ships still don't stop there so we spent two days in Cabo.  On our second day we rented a jet ski and had a great time!  We went through the locals so they didn't give us any rules or restrictions at all so it was super fun.  I think Logan was a bit nervous when I was driving because he didn't have control so that made it even better :) (We didn't take our camera off the boat this day so sorry for the lack of pictures)

Our second stop, Puerto Vallarta, was mine and Logan's favorite!  We got off the ship and found a zip line through the locals and it was honestly one of the funnest (I know that's technically not a word) things I've ever done.  I did a zip line once before but we did it through the cruise line and it wasn't nearly as good as this one.  If you're in Puerto Vallarta, go on the Canopy River zip line!  Unfortunately they made everyone put their cameras inside lockers before we started because they wanted you to buy the ones they took, which we didn't.


The last two days were spent at sea and unfortunately the weather got a little gloomy as we got closer to LA so we didn't do much outside. Thank goodness there's a lot to do on a cruise ship!  Other than the different ports, a few of our favorite things were the nightly Sushi Bar, the Comedy Club, the Couples Game (it was absolutely hilarious), and of course all the food you can possibly eat!

We're so happy we took the break from school and work and look forward to our next adventure...whenever and wherever that is!

One of My Greatest Blessings

I think I will continue the blog challenge at some point because I had a lot of fun with it but I'm going to take a break for now and post something about one of the sweetest angels in existence.  My oldest nephew, Will, turns 8 in a couple weeks and is getting baptized at the beginning of June.  His parents had baptism pictures taken of him and they are definitely one of the most adorable things I have ever seen!  It helps to know his stinkin' cute personality but the pictures speak for themselves :)  I had a hard time choosing but here are a few of my favorites: 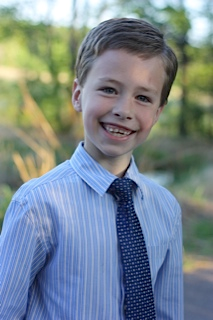 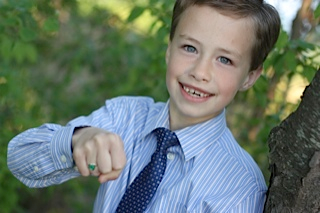 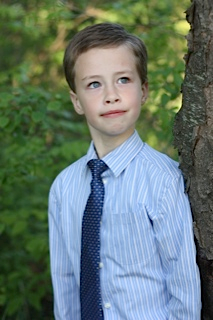 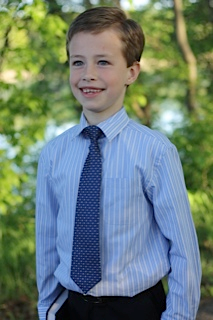 Unfortunately Will's family lives in Minnesota due to my brother's job but that hasn't stopped me from visiting as often as possible!  I can't wait to share his special baptism experience with him in a few weeks and am so glad he's my little stud muffin!

I have loved this blog challenge business--much more than I thought I would for sure! What I love even more, however, is the thought of going on a week long cruise with Logan! No school, no work, no worries :) Catch y'all in 7! 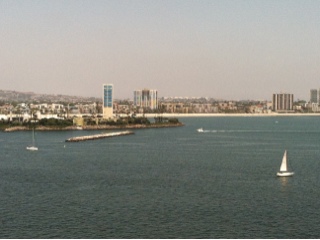 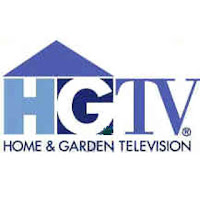 I know all of those shows are on HGTV so it might not count but that's really the only thing I ever watch if I'm not watching a Jazz game! 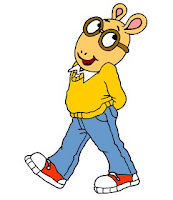 
I'm pretty sure Logan's life would be complete if he ever got the chance to meet Bear Grylls.  He basically lives by everything that man says or does!


Day 7: A picture of someone/something that has the biggest impact on you
Posted by Liz and Logan at 9:48 AM No comments:

A Picture of Somewhere You've Been:

Liz:
This is by far one of the coolest things I have ever done!  I went on a cruise in May of 2010 with my mom and some friends and this is one of the excursions we did.  I always worry that I'm going to pay for something at one of the ports and it won't be worth the money but this was definitely worth it plus some! I was amazed at how well trained the dolphins were and everything they could do.  If you ever have an opportunity to swim with dolphins, take it!

As I mentioned in day 1 of this challenge, Logan served his mission in Germany and Austria.  We figured the most convenient way to send pictures to each other while he was gone would be to send a memory card back and forth with the pictures we had taken on it.  I still remember the day I got the memory card in the mail and these two pictures were on it!  I have never forgotten them!  I couldn't pick one to post so I had to put both.  Here is what Logan has to say about them: (Top Picture) "I had no idea if it was going to attack me.  I might have feared for my life for a second." (Bottom Picture) "That view of Italy was amazing.  It's a good thing I didn't slip on that small ledge because the fall was hundreds of feet."  To say I was terrified when I saw this picture is an understatement!

A Habit You Wish You Didn't Have:


While there are many things that I should do less/more of, the first "bad" habit that came to my mind is my love/passion/obsession for the Jazz.  That doesn't sound so terrible at first because what's wrong with being an avid Jazz fan, right?  Wrong.  Ever since I can remember, I live and die by the Jazz in the worst way possible.  Although I have tried to be better lately, I was awful in high school.  There were many moments when the Jazz would lose and I wouldn't talk to anybody and if I did, I felt bad for the other person haha.  (THIS picture just about sums me up on a night the Jazz lose!)  On the flip side, if the Jazz win, I'm without a doubt the happiest person in the world!  I feel as high as a kite and nothing can put me in a bad mood.  Logan is very much aware of my issue and I know he really dislikes it.  I've been pretty good ever since we got married but I will occasionally tease him by telling him that he needs to cheer extra hard for the Jazz to win so I can be in a good mood the rest of the night haha.  (I'm totally joking, of course!)


When I asked Logan what habit he wishes he didn't have he thought for a minute and then said: "Candy.  I wish I didn't eat so much candy!"  I have to agree, the boy does love sweets, especially fruity ones.  I know Logan loves holidays because there's so much candy lying around all the time.  He would probably eat candy the rest of his life for every meal if I let him! ;) I'm kinda surprised THIS wasn't our wedding! Good thing he's skinny, right?


Day 5: A Picture of Somewhere You've Been

A Picture of You and Your Friends: 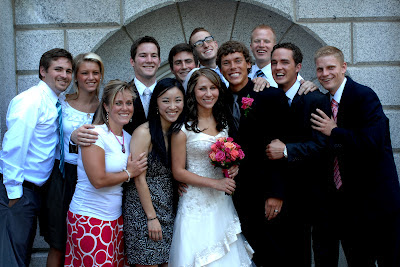 One of the (MANY) wonderful things about being married to Logan is that we have the same group of close friends.  Having gone to Jr. High and High School together, we hung out with the same fantastic friends and have stayed close with them ever since.  I have known the majority of the people in this picture since we were wee ones in kindergarten and I am so grateful we are still just as close!


Logan's List: These all came from him
1. Visit Europe for the 2nd time
2. Become a car expert
3. Own Jazz season tickets in the lower bowl
4. Complete graduate school
5. Visit Turks and Caicos (See pictures HERE and HERE)


Simply making these lists and thinking about doing these things makes me want to work harder every day in order to put us in a position one day to drop these items in the bucket!