When we were initially told our stay here in the hospital would be 4-6 months I was quite shocked.  It's hard to imagine living away from home for that long, especially when your little family can't be together all the time.  They brought us to our cozy room and my first thought was: "I have to make this place feel more homey asap.  I can't possibly live in a plain hospital room with a jail cell-like-crib for that long."  A few cousins drew Eli some pictures, we brought in a few pictures of our little guy and some children's books and switched out my hospital bedding for some of our own blankets and things started to feel better right away :) It's not much, but it feels much more like home than before! 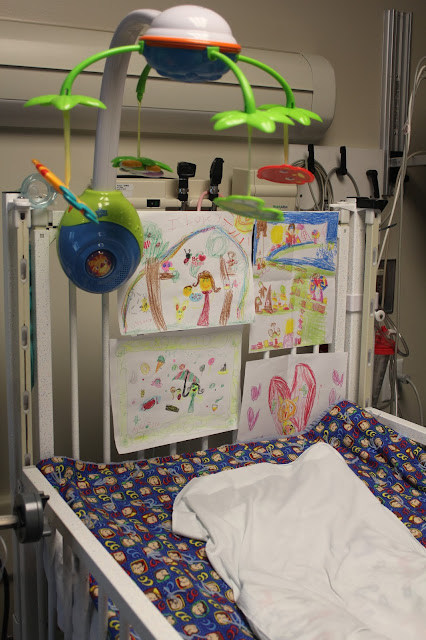 I can't remember if I already mentioned it in a previous post but only one parent is allowed to spend the night regularly but they will make special accommodations if something is going on.  The night before Eli's procedure last week Logan stayed over and it was quite horrible because Eli was upset (because he was starving) and both Logan and I were trying to sleep on that tiny bed.  For me, it's a little easier saying goodbye to Logan each night now because I know he's going home to get much better rest than he would here and I'm able to sleep more soundly as well.

The past 48ish hours have been rough for our sweet little boy.  His central line was placed Saturday and by Monday it was already infected.  Because he has no immune system they have to be very careful with him getting any infections at all.  They started him on a pretty strong antibiotic but after 24 hours it still hadn't gotten any better.  On Tuesday evening they had to remove the central line (fortunately this was just done at his bedside while he was awake) and place a regular peripheral IV.  Not only was I super bummed out that he had an infection, I was just as discouraged that he would have to go under sedation again to replace the central line at some point.  On Wednesday morning his IV went bad so they had to replace it and on Wednesday evening that IV went bad too so they had to replace it again.  This morning when they were running his antibiotic I went to change his diaper and noticed his foot was wet so I looked at the IV and saw that it was leaking and his ankle was pretty puffy.  I called the nurse right away because the antibiotic he's on is quite strong and can do damage to the skin and tissue if it gets in there at all.  They stopped the antibiotic and removed the IV and of course had to come place a new one, 4th in the last two days, so they could finish the antibiotic.  After they finished placing the IV they had to give him 5 shots in his foot in order to prevent the antibiotic from spreading :( Thank goodness Logan has had the last two days off work because it allows me to leave the room when these awful things happen and he can stay and comfort our little guy.  While I've known from the beginning that there will be good days and tough days, it still doesn't make the tough days any easier.  When he's going through a lot and seems so sad I have to remind myself that he really has been doing so well and most days are really good.  A few days ago was one of those happy days: 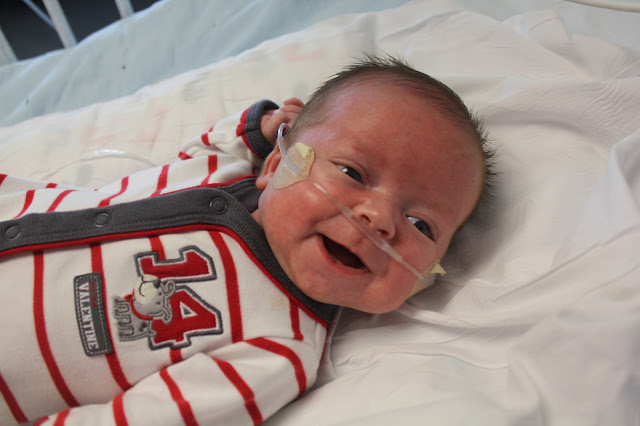 Because he's had so many failed IVs, they worry about the risk of infection increasing because they have to continue placing a new one so often.  They can't replace the central line yet because his little chest is still infected so they decided to find something in the middle so tomorrow they will place a picc line in his arm.  From what I understand, a picc line is pretty similar to a central line but it's not quite as permanent so he will still have to have the central line put in before his treatments.  One thing I'm definitely not looking forward to with him getting the picc line tomorrow is the sedation because the sedation means he can't eat again :S.  We got some good news regarding that, however!  I'm not sure why in the world they made him go so long without food the first time because they just told us he needs to stop eating six hours before the surgery but he can have Pedialyte up until 2 hours before.  Hallelujah!  We can definitely do 2 hours way better than half the day like last time.  Tonight might not be so bad after all!

The doctors make their rounds every morning so they can come check on Eli and see how he's doing and also give us any news they might have.  They told us to plan on this week being pretty quiet with not much to report since we're still a week to two weeks away from finding out what his bone marrow typing is so we were pretty surprised when they came in this morning with two bits of news.  News #1: They finally discovered what his rash is from!  It has been the biggest mystery to everyone from me and Logan all the way up to every specialist here at the hospital.  They've been getting blood from me periodically so they can see if I passed any viruses to Eli during pregnancy and it turns out I actually passed some of my cells to him.  Even though he doesn't have much of an immune system he still has a bit of one so when my cells finally settled down into his body they basically started fighting with his cells and that's why he broke out in this wicked rash.  I wish I had taken a picture of his whole body but things were crazy at that time so I totally forgot.  You can get a pretty good idea what it looked like from this picture:

The doctors said only 5% of my cells are in his body so not too many.  Once he has his chemo it will get rid of his cells and my cells so he will be fine after that and they'll just keep a close eye on him until then.

News #2: Eli's bone marrow typing came back today!  They originally told us to plan on 2-3 weeks and it has only been a week and 2 days :).  Unfortunately the database they throw his typing into to determine which type of match he needs is down for maintenance but they are hopeful it will be up and running by Monday and then we will have a better idea how long they think it will take to find a donor depending on how rare or common his typing is.  When I mentioned to his doctors that the typing came back a lot quicker than they expected he said they put a rush on it and asked them to get it back as soon as possible.  Thank goodness for the amazing staff here at PCMC! (Although Logan and I know the real reason it came back so fast is because of everyone's prayers on our behalf so thank you, thank you!)

As they were leaving, his medical team said they are very pleased with how well he is thriving and gaining weight since he's been here and told me and Logan to continue doing whatever we're doing because it's working.  That was music to our ears and so comforting to hear!

Logan and I are completely amazed and humbled at the amount of support we have received since Eli came to the hospital.  I don't think any of you realize how much your prayers, thoughts, comments, and offers for help truly do bring us comfort and strength to get through each day.  It is so reassuring to know that we have so many people there for us that are cheering our little guy on and praying for him so hard.  If we aren't able to respond to every comment, phone call, text or message right away please know that we cherish each one of them and can't thank you all enough.  If there is ever a way to repay each one of you for all of your love and concern we absolutely will.  THANK YOU!

A peek into the life of our little man: